ENERGY METALS: The World’s Safest Source of Energy Will Surprise You 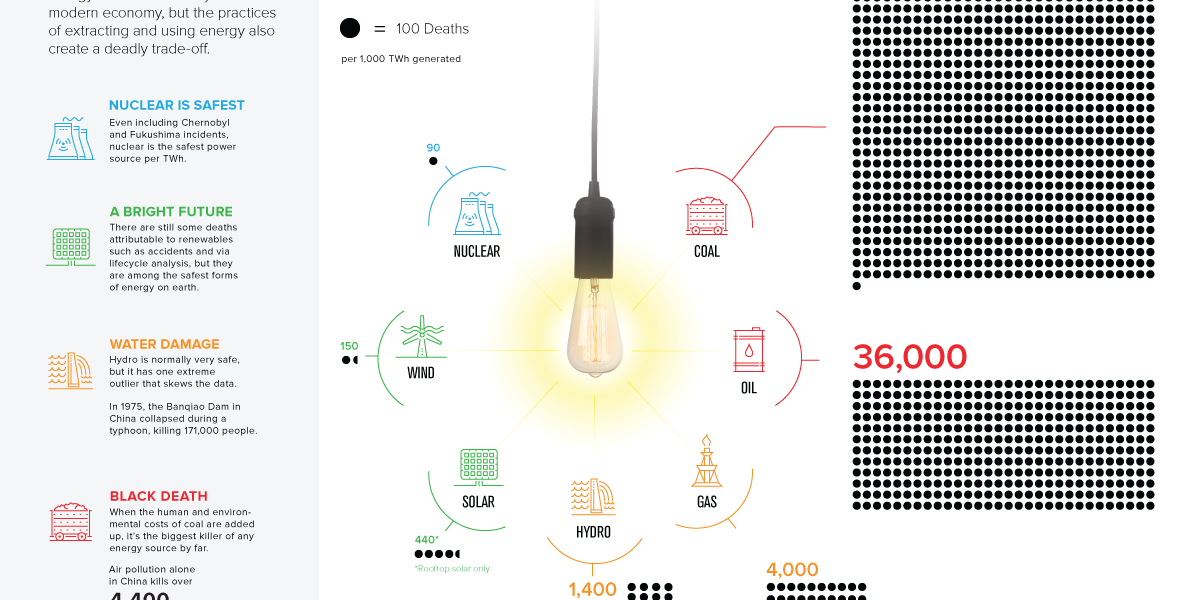 When it comes to conversations on energy, it’s hard to leave your feelings at the door.

It’s arguable that energy is the single most important driver of human progress – it’s a multi-trillion dollar industry that powers our daily lives, technological advancements, and even the economic development of entire countries. At the same time, our choices around energy can have significant consequences. How we decide to generate energy can decimate the environment, fuel political conflicts, and even cause human deaths as unwelcome side effects.

The outcomes from our choices around energy are so vivid, that we’ve developed strong and polarized associations with the subject at hand.

Click HERE to view the infographic in its full glory!

Today’s visualization on the safest sources of energy comes to us from Cambridge House, the company hosting the International Mining Investment Conference 2018on May 15-16 in Vancouver, BC, and it uses an empirical approach to compare different energy sources with one another.

Based on the data, this comparison provides a perspective that will be surprising to many viewers. Despite its perceived dangers, nuclear is actually the safest type of energy.

That’s right – even when including seemingly catastrophic incidents such as Chernobyl and Fukushima in the calculations, the math says that the amount of energy generated by nuclear is so vast that it more than outweighs these incidents over the long-term.

The reality is that nuclear energy is much more comparable to renewables like solar or wind, in terms of safety. More importantly, it’s on the polar opposite of the spectrum from coal, which manages to kill 4,400 people daily in China alone.

Interestingly, multiple studies have come to this exact same conclusion, including the ones used in an analysis by economist Max Roser’s project called Our World in Data.

Even though the conclusion on nuclear is pretty cut and dry, it’s still hard to absorb. After all, the relative safety of nuclear ends up being extremely counter-intuitive to our human brains, which are seemingly wired to put more weight on big, memorable events (i.e. Chernobyl) rather than slow, consistent deaths that occur over time with other energy sources.

Today, nuclear provides about 11% of the world’s electricity from about 450 power reactors, generating about 2,500 TWh of electricity each year.

And while there are still questions that remain – specifically revolving around how to store certain types of nuclear waste – the above data explains why the majority of scientists classify nuclear as a sustainable and safe energy source, along with other renewables.

Click HERE to view the infographic in its full glory!

What is VC Metals? You may have noticed that this site is different from our main one. That’s because this is the “soft launch” of a new channel within Visual Capitalist that focuses on investing in commodities, metals, and energy. Expect more soon!