Published in Corporate Presentation, on July 22, 2017

00:23 I've been an equity analyst as well and done MNA work, so fairly extensive history of myself. I joined this company in 2012. The company was founded in 2007 by Govind Freeland the son of Robert Freeland.

00:39 He saw an opportunity to acquire the mineral licenses that are between the source and we at Riva get 8% the world uranium from Niger.

00:50 Since we acquired those properties, we've done 650,000 meters of drilling, we’ve build it up to one of the largest uranium deposits around with 120 million pounds.

01:00 It’s high-grade for Africa. Cash costs are forecast here at $25 a pound. So don’t be fooled, the greatest totally king our industry, a lot of other issues going into how you generate the costs.

01:13 Since then we’ve taken that through three PFS-s. One of the key issues of being in Africa is you can get projects permitted relatively quickly.

01:21 From the application from our Environmental Permit, it took us six months to go to environmental sign-off.

01:28 It took us six months to get on mine permit. The equivalent here in Canada is between 10 and 15 years.

01:35 So working in Africa means we can get our projects developed. Our strength is now, after acquiring further projects with different Denison last year, we have two projects with about 170 million pounds total, but both of them are permitted, ready to be built now.

01:52 So we're saying, these are investing in. Goviex is the kind of guy who can get out there and build the projects.

01:59 If you think the cycle’s turning, you want the guys who can turn these into mines. That’s what we're ultimately about.

02:05 We've got over 200 million pounds of uranium in the ground, we've drilled just over 10% of the maximum on any of our exploration properties.

02:15 We can considerably increase these. The reason we don’t is we don’t want to waste shareholders’ money drilling for more uranium when we’ve got to make the projects, we’ve got work first.

02:25 This is about generating cash flow. We’ve got interesting shareholder base. We have Denison Mines. There are 20% of our shareholders, we have Toshiba, we have Cameco, and we have Ivanhoe Industries.

02:36 [TSXV: GXU URANIUM SUPPLY AND DEMAND Demand Uranium demand driven by nuclear energy growth forecast at 3% per annum average. China nuclear energy capacity from 30 GWe to 130 GWe by 2030, 240 GWe by 2050. India growing from 5 GWe in 2014 to 17 GWe in 2024 and 63 GWe in 2032 Japan restarts slow to begin, but still targeting approx. 20% of long-term power mix. Annual demand forecast to rise from ±180Mlb U308 in 2016 to 220Mlb to 260Mlb in 2025 based the scenario Supply Mined uranium expected to decline from ±160Mlb U308to approximately 145Mlb during the same period, unless new mines are developed. All-in breakeven cost for uranium mines estimated at USS40 and US$50/lb U308, clear the uranium price must be significantly higher to incentivize new production Utility inventories elevated, but not far from historical levels, and evidence indicates they are relatively illiquid. Total inventories are at ±50% their level in 1991.]

02:36 Very briefly on the uranium market: this is all about build, if you look at any of the forecasts out there, there’s very little difference on the demand side and whether you're reading UXE Trade Tech, BP, Exxon, they are all pretty much the same.

03:00 This is becoming a supply side issue guys. In that same time frame you are looking at 20% of the world production closing, not because it is uneconomic, because it has run out of anything to dig out of the ground.

03:13 These are old mines coming to the end of their lives.

03:17 The issue you’ve got forward is you need incentive price between 40 and 50 dollars even for the best mines to justify building them.

03:26 So, you’ve got a declining supply going forward, and the price is not there to build new operations.

03:32 Where Goviex sees itself is when that market opens up and we are expecting it around 2020, we are targeting to build our first mine.

03:41 So that really is the leverage you’re looking at with someone like ourselves. Because we have 2 permitted mines, we can be going into construction when the price is rising and getting you the best leverage on the uranium price.

04:05 Zambia is going to be about $40 a pound. We’ll be just completing a transaction where we are acquiring some different license, additional licenses that we’ll be putting at PA out on that project towards the end of the June-July-August.

04:19 It's actually already gone to PFS standard and we are just increasing our third recourse hence the PA.

04:48 So even though the grades are very different, your biggest primary cost item is much cheaper for the lower grade.

04:58 The key driver here is our ability to turn these into producing assets in the next five years.

05:06 [TSXV: GXU RESOURCE COMPARISON AND ACCRETION • On a U308 and an U308Eq basis. GXU has one of the largest Mineral Resources (1) amongst its uranium peers Mineral Resources Measured, Note: Mineral Resources estimated in accordance with N143-101 Indicated Inferred Source Eight Capital as at 10/04/17 (1) Assumes completion of AFR Transaction]

05:06 We have a very large resource, also importantly note that our resource is predominantly in the Measured and Indicated.

05:14 We’ve already spent the money converting this into bankable pounds. A lot the companies you’ll see have a large in third resource.

05:21 They have got to still spend money increasingly up the understanding of that resource with no additional pounds.

05:42 What are we doing? This is our focus, our focus is getting the money together to build the first project.

05:49 One of the issues the industry has now in the project finance market is pretty well tossed.

05:57 After the 2008-2009 crash a lot of the big project finance companies, the big banks to do this are not doing that anymore. They have no capital in position to do this.

06:07 We are being innovative, we have reached out and are actually doing it through export credit financing.

06:14 We are getting sovereign banks, sovereign entities to provide the insurance for the underlying institute banks to come in and lend the money.

06:32 We're also starting to structure the off-take, because I'm trying to underpin the total debt there with that off-take.

06:40 Just one other note here: both Medea and Houlihan Lokey, these guys are the old socks Jen team that in 2008 onwards with the team that was financing and doing the debt structuring for the projects in Africa they were getting built.

05:54 This is the only team that financed projects in the last cycle from a debt perspective. So we’re using the guys who’ve got the experience.

07:02 I continue to optimize project. Very much our key focus while we’ve got the time, I am seeing what I can do as a project team to reduce the cost even further, simplify the projects and get them ready to go forward.

07:17 Team. The key guys I’d point out here just seeing from a Director’s point of view... having Dave Cates on the board. He's also the CEO of UPC, so we got a lot of market information. Gives us a lot of access to the off-takers. And Benoit LaSalle who's the founder of SEMAFO.

07:35 We are in West Africa, we have to operate in there. Having a gentleman with his caliber understanding the market is key to how we develop our business going forward.

07:45 Just through our shareholders Toshiba Corporation while they are having their issues on Westinghouse, my forecast on Westinghouse, which I think will come right, you will see Westinghouse come out of this a lot stronger than the issues they went into.

07:59 Treat this like the Ford Motor Company etc. when they went into to chapter 11, they came out a lot stronger than went to and that's where Westinghouse is.

08:07 They are strongly committed, they are still the largest seller of reactive components and reactors in the world.

08:12 Denison Mines, you guys are probably here in Canada know who they are very well.

08:15 They came to us because they wanted the leverage on the African assets. They saw us the team that could develop Africa.

08:22 We are the major consolidator in Africa, and, as I said, we like it because we can get permits, we can get things done, we can get mines built.

08:30 No point if this cycle run sitting owning shares in a company that you have to wait for 10 to 15 years.

08:36 Also, please note that in Africa the lot… three largest transactions in the last cycle took place in Africa.

08:49 So we are important place to be investing. Why? Because you can get the mines built. 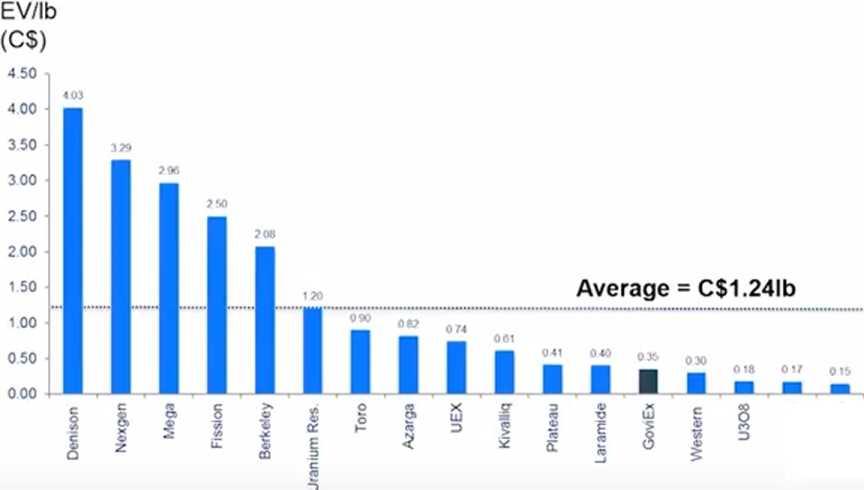 08:56 We are still undervalued massively compared to our peers. The fact that one we’ve got one of the largest resources and two permitted mines, we're still sitting at a discount.

09:05 You’ll see this unwind. This is like a dollar trade guys, when the market is in a risk position, people go to the safe haven. When the cycle turns and the emerging markets and looking a lot more interesting, people go to the other currencies and the dollar comes back down.

09:21 The same will happen here when this uranium cycle comes, the real value will come to the surface, of that’s those companies that can get out and build those mines.

09:31 Where we standing: I'm sitting about three and a half million dollars US in the Acadia at the moment. That covers for about a year. I've got 131 million warrants out there, 81 million of those warrants can be accelerated, they worth 10 million dollars in cash.

09:47 About 6 million of that is currently in the hands of Denison and Ivanhoe.

09:52 So I have two friendly hands sitting there with cash.

09:55 If this market moves, I've got access to capital to start accelerating the development on the projects going forward.

10:06 So just resubmit where we are: strong shareholder base, very large resource, a lot of exploration side, advance projects. We are already in that position of structuring the debt which again is a very difficult thing to find going forward and currently, and our ability, because of those permitted mines, to build projects is going to be key to our way for it. Thank you very much.