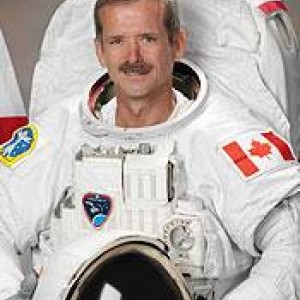 “Good morning, Earth.” That is how Colonel Chris Hadfield—writing on Twitter—woke up the world every day while living aboard the International Space Station for over five months. Since blasting off from Kazakhstan in December 2012, Hadfield has become a worldwide sensation, harnessing the power of social media to make outer space accessible to millions and infusing a sense of wonder into the collective consciousness not felt since man first walked on the moon. Called “the most famous astronaut since Neil Armstrong” by the BBC, Hadfield—now safely back on Earth—continues to bring the glory of science and space travel to everyone he encounters.

Hadfield is the pioneer of many “firsts” in Canadian space history. In 1992, he was among the first chosen as Canada’s second class of astronauts. Three years later, he became the first Canadian to use the Canadarm and the first Canadian to board a Russian spacecraft during his mission to the Russian space station. In 2001, he performed two spacewalks as a mission specialist on STS-100―the first Canadian to do so, and in 2010 the Canadian Space Agency (CSA) and the National Aeronautics and Space Administration (NASA) announced Hadfield’s third mission: commanding the International Space Station (ISS)—again a first for a Canadian.

Hadfield launched into space on December 19, 2012 and took command of the ISS on March 13, 2013. His multiple daily Tweets and photographs from space made people see the world differently. His Twitter conversation with William Shatner, who played Captain Kirk in the originalStar Trek series, went viral (“Are you tweeting from space?” inquired Shatner, who got a quick reply: “Yes, standard orbit, Captain. And we’re detecting signs of life on the surface.”), and even Queen Elizabeth Tweeted the station commander.

Hadfield’s accessibility, whether answering questions such as “how do you wring out a washcloth in space,” via Skype or collaborating with The Barenaked Ladies for a song sung by over a million people simultaneously, endeared him to all while he orbited Earth. When, on his last day on the ISS,  he posted his farewell music video online―a reworking of David Bowie’s Space Oddity―it exploded, garnering millions of views in its first hours alone.

“Who’d have thought that five months away from the planet would make you feel closer to people,” asked Hadfield. “This experience is not individual―it’s shared and it’s mutual and it’s worldwide.”

A heavily decorated astronaut, engineer, and test pilot, Hadfield’s many awards include being named a Member of the Order of Ontario (1996); receiving an honourary Doctorate of Laws from Trent University (1999); the Vanier Award (2001); the NASA Exceptional Service Medal (2002); and the Queen’s Golden Jubilee Medal (2003).  He was inducted into Canada’s Aviation Hall of Fame in 2005 and commemorated on the Royal Canadian Mint silver and gold coins in 2006.

Hadfield announced his retirement from the CSA on June 10, 2013.