The Junior Miner with the MAJOR Team 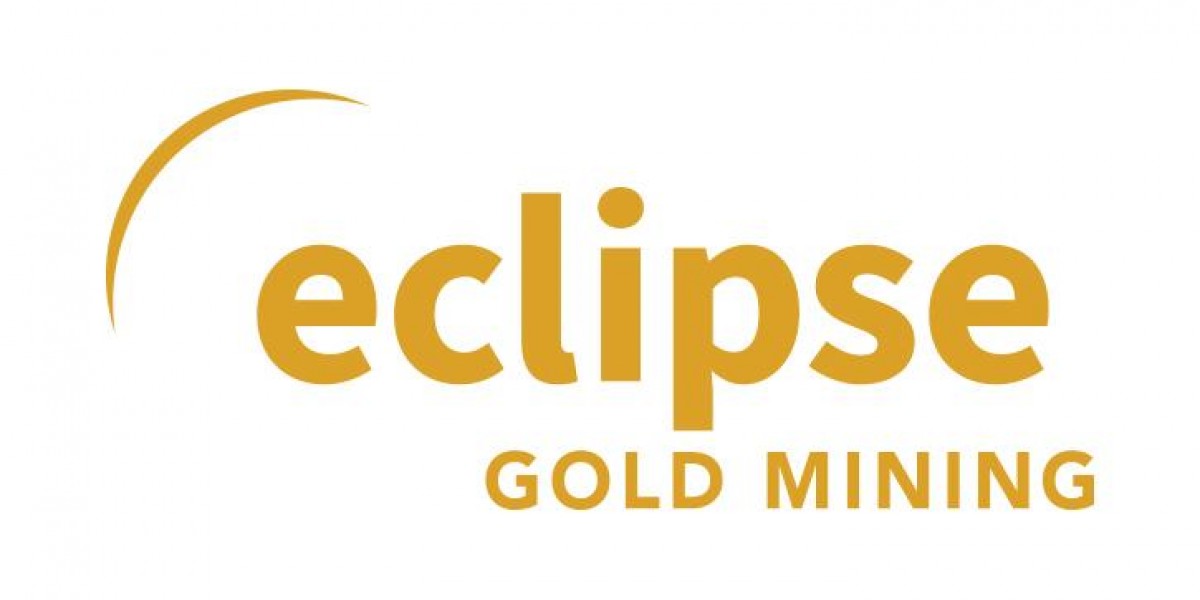 3. Skin in the Game: CEO is the largest shareholder, Insiders and Management own 40% of the company

Eclipse Gold Mining is a confluence of entrepreneurs from the resource business that have collectively generated over eight $100M+ exits for their shareholders, including the $1Billion+ takeouts of Arequipa Resources and Newmarket Gold.

In addition, they were on the ground floor for some of today’s best known success stories - Equinox Gold, Sandstorm Gold Royalties, Kirkland lake Gold and Calibre Mining.

To Break Down Eclipse Gold Mining Corp., we will apply our P.R.O.F.I.T. acronym:

He put his shareholders first, took the bid, and handsomely rewarded everyone who backed him. 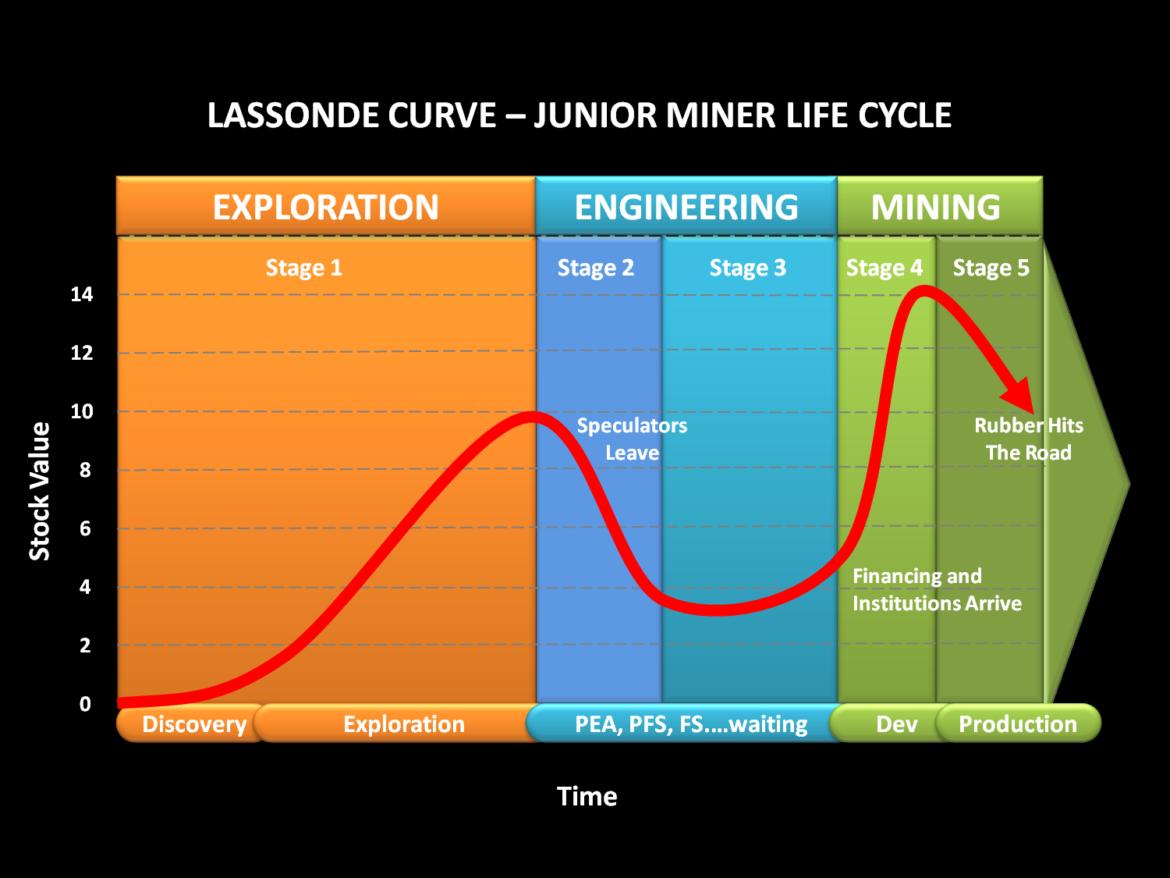 Mike understood as a public company CEO, his first role was a steward of shareholder capital - he wanted to keep building, but he controlled his emotions, took the bid and made his investors rich.

And success begets success - as the great Ross Beaty says:

“Success begets success. This is a high-risk business. So when you take people’s money, I truly treated it like my own. If you can make people money, they’re going to roll the dice with you again.”

Similar to rock stars like Ross Beaty and Mark O’Dea, prior to hitting his first home run as a CEO, Mike Allen earned his credibility as a geologist. He was VP of Exploration with West Kirkland, Senior Geologist at Silver Standard, and got his start with De Beers, Taseko and Rubicon.

Allen has already led a company to a $100M+ exit for his shareholders in a poor gold market. What will he do with a tailwind?

Marcel is President and Co-Founder Pathway Capital. Pathway Capital has supported companies raising over $2 Billion in equity financings, in addition to involvement in several billion dollars worth of M&A transactions.

He is a Director of Equinox Gold and Asanko Gold and sits on the board of Sandstorm Gold Royalties.

Marcel has been involved in many successful companies as a director. He was on the board of Underworld Resources, helping guide the company to a $138 million takeover by Kinross Gold.

Marcel sat on the board of Premier Royalty, which was purchased at a premium, providing a big win for shareholders.

Marcel's Pathway Capital worked on Peru Copper, which was subsequently bought out for C$850 million in 2007 by Chinalco.

Hurst may be known as “The Quiet Director”, but his resume speaks loudly. He has the cache to watch deals go by, and wait for the perfect hand before going all in.

Hurst was the Executive Chairman alongside Mike Allen at Northern Empire. Mike credits Hurst as his Mentor.

Hurst is a current Director of Calibre Mining and Newcore Gold.

Dr. Warwick Board, VP of Exploration

Leading the exploration for Eclipse is Dr. Warwick Board. Warwick is the Former VP Geology and Chief Geologist of Pretium Resources and was the Sr. Resource Geologist with Mike Allen at Silver Standard Resources, two top tier companies with exceptional leadership.

At 26 years old, Nolan Watson was hand picked by Ian Telfer to take the CFO seat at Silver Wheaton (Now Wheaton Precious Metals) making him the youngest-ever CFO of an NYSE listed company.

Nolan since founded Sandstorm Gold Royalties (Backed by Marcel’s Pathway Capital) and built it from nothing into a $2.5 Billion company.

I have to cut this short - I could write this entire report exclusively on the people behind Eclipse. So below are the Coles Notes on some of the remaining team.

This may be the most stacked management team I have ever seen. Note all the ties to some of the industries top performing companies:

Eclipse has filled every seat with killers, no fluff, no slouches.

Marcel De Groot and Dave DeWitt at Pathfinder Capital had been watching what Mike Allen did with Northern Empire - acquiring the Sterling Gold Project in Nevada for $10 million and selling it in little over a year for 9X what he paid to Coeur Mining.

It was at the Beaver Creek Conference shortly thereafter (September 2018), that Marcel and Dave sat down with Mike and began discussing a partnership and consecutive venture.

Like many great CEOs in the mining industry - Mike Allen was a geologist first. His core skill set is finding great projects, and asking frequently overlooked question: Can this legitimately become a mine?

The conversion at Beaver Creek went well, and Mike moved into the office at Pathway Capital. In true obsessive fashion, he poured over 90-100 projects before landing on the Hercules Property.

Hercules, the most popular figure from ancient Greek mythology, was born a demi-god with incredible strength and stamina, famous for his numerous far-ranging adventures.

A district-scale land package (85 km2), that despite long exploration history by multiple operators (+250 drill holes), the absence of a single consolidated database precluded assessment of system-scale potential. Through a perfect storm of fractured ownership, this asset had been hiding in plain sight – just one hour outside of Reno, Nevada.

In the words of CEO Mike Allen:

“Finding and choosing Hercules was a matter of seeing something that was left behind, even as far back as the Comstock gold and silver rush. We were shocked the moment we set foot on the claims and saw their potential for a major gold system. Every time we sample, we find a lot of gold. It keeps surprising us.”

The previous optioner was a junior minor that had pivoted into lithium. Hercules had become a non-core asset.

By coincidence, Sandstorm had held some ground nearby, and the team from Northern Empire was familiar with the property, and in August of 2019 Mike and the team were able to do a deal for $325K cash and 4M in shares over four years and assuming the underlying option agreement.

Hercules was theirs. Thier property had room for new discoveries and space to develop an operating mine.

5 Facts on the Hercules Property:

1. Located in Nevada - Where the World Goes for Gold

- Stable and mining-friendly, permitting is predictable and transparent, it’s easy access to projects, and the tax regime is great for miners

3. It’s the Right Type of Deposit

- Similar type of deposit to Kinross’ Round Mountain

- Broad intervals of oxide-gold silver mineralization were intersected in all target areas, some greater than 50 meters

5. Attractive to a Major

Even in mining friendly Nevada, permitting can be a laborious task for juniors.

- Allows for 5 acres of ‘disturbance’ including roads, sumps and drill pads.

- A notice level permit can be achieved in as little as three weeks.

- Generally, projects are initially permitted at the notice level.

- Allows for disturbance of up to 640 acres including roads, sumps and drill pads.

- A plan of operations permit takes 15 to 24 months to secure.

The Hercules Project already has a Plan of Operations in place - and is currently far down the path of updating and expanding their POO for further exploration - atypical for a junior miner to be so forward thinking - this is a testament to their executive leadership.

- Drilling intersected shallow oxide-gold in almost every drillhole, some at intervals greater than 50 metres, and broad zones of higher-grade mineralization were identified.

- The Hercules mineralizing system appears to strengthen towards the south.

- These results indicate that mineralization at the Hercules Gold Project is potentially similar to other large Walker Lane-hosted, low sulphidation epithermal gold-silver systems. 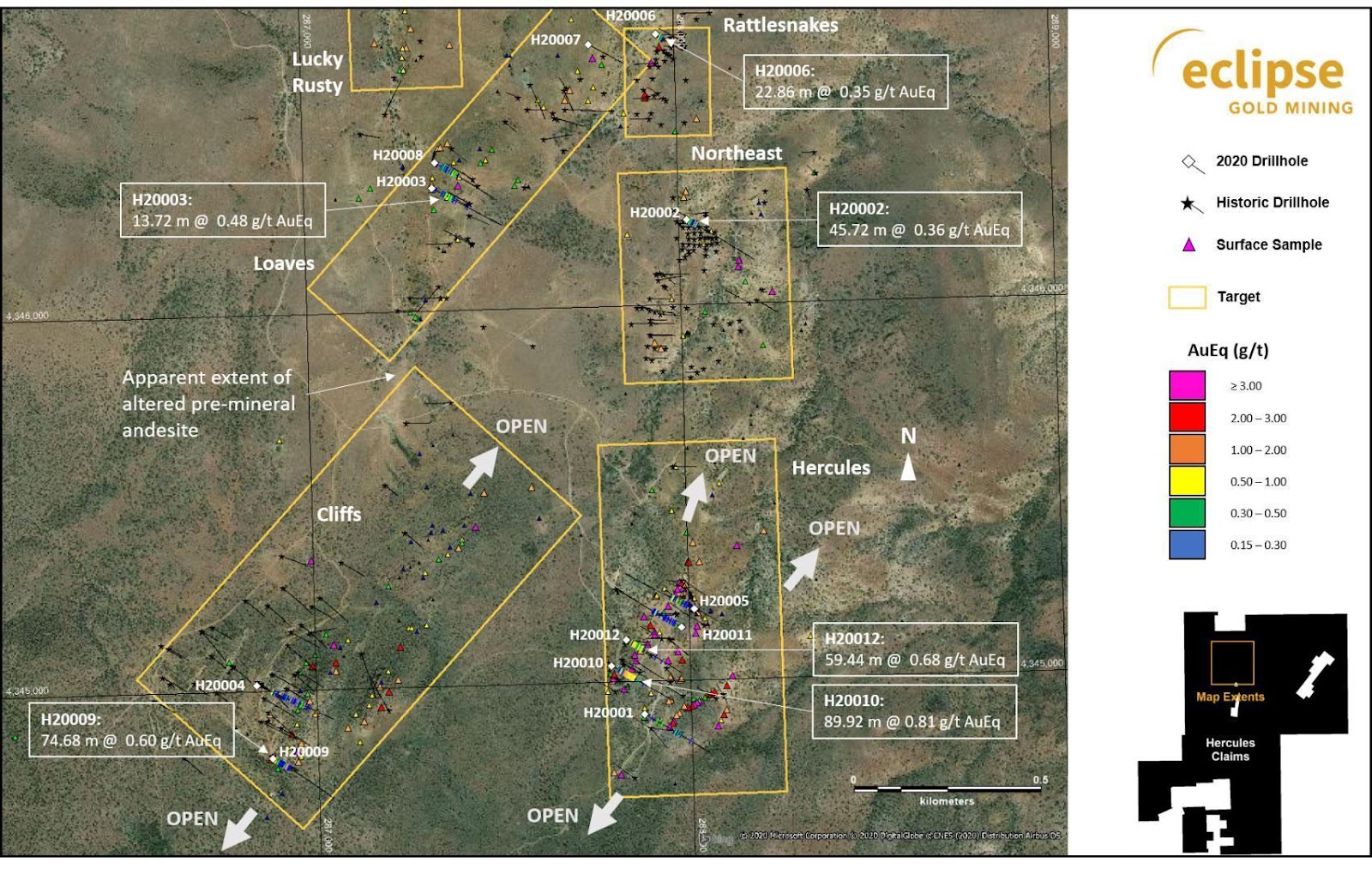 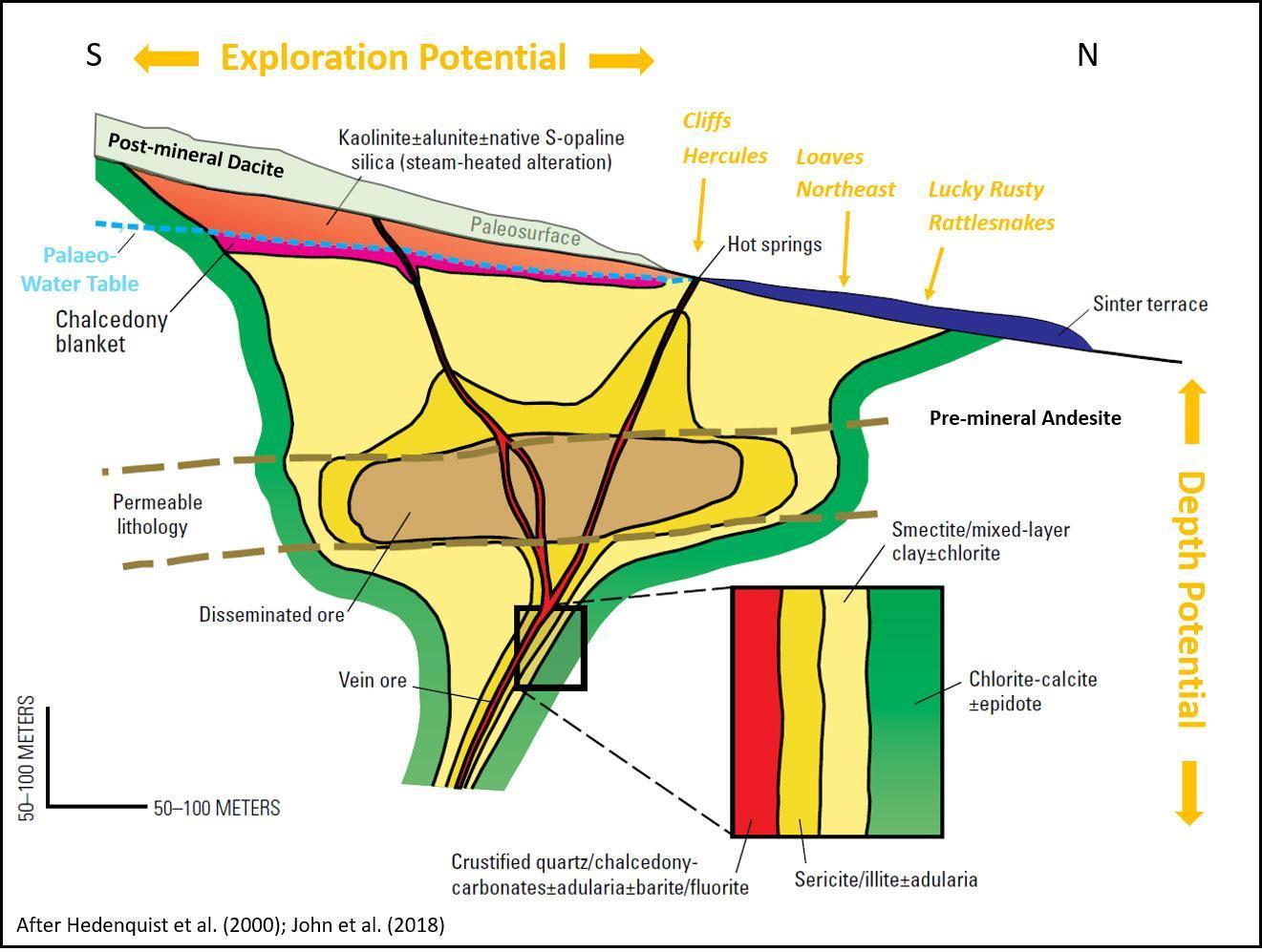 Drilling is planned to include up to 18 reverse circulation holes, totalling approximately 6,750 metres.

- Potential extensions of known gold mineralization to the east of Cliffs 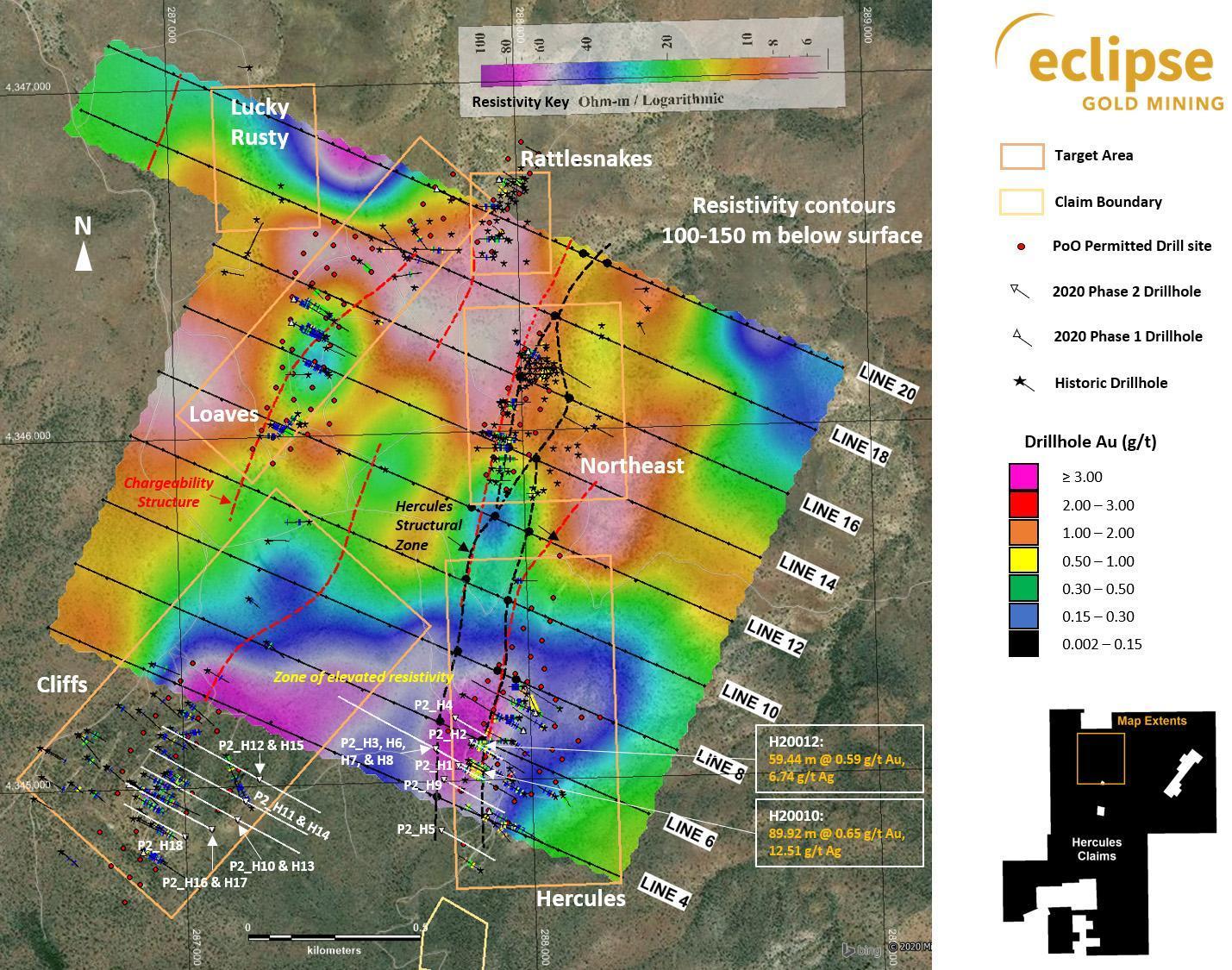 “When you get things right in this business, you can make people a tremendous amount of money. Exploration and discovery are where fortunes are made.” - Eclipse CEO Mike Allen

EGLD is cashed up with $11M in the bank and no debt. They have a plan of operations in place and are set up to move towards resource delineation.

The risk with this company is the exposure to a single asset - but their asset is large - and for the first time in history, being explored in totality. Despite being in the most favourable gold jurisdiction in the world (Nevada) and only being one hour outside of Reno, this is the first time the whole system has been consolidated for drilling and exploring.

This could be a generational mine, similar in size to Round Mountain.

CEO Mike Allen is always looking at properties - and is surrounded by amazing individuals that have great deal flow. I expect the team he has assembled at Eclipse the meet my criteria of People Over Everything investing:

Remember, when I invest in an entrepreneur, I am betting that:

1. They will surround themselves with other brilliant people

2. They will chase the smartest business opportunities

3. When Plan A and B get disrupted, they will have the foresight and resilience to chase Plan C

One of the first questions you should ask every company before writing a cheque is this:

Who is your largest investor?

It is a trick question - because there is only one right answer.

In the case of Eclipse Gold Mining, CEO Mike Allen is the single largest shareholder.

There is no cheap paper held by anyone outside of management and insiders whose shares are escrowed for three years. I am okay with management having cheaper stock than me as long as they are the majority shareholders and they continue to purchase stock at higher prices.

The management at EGLD checks this box. Insiders and management put in another ~$1.2 Million at the recent .75 financing. 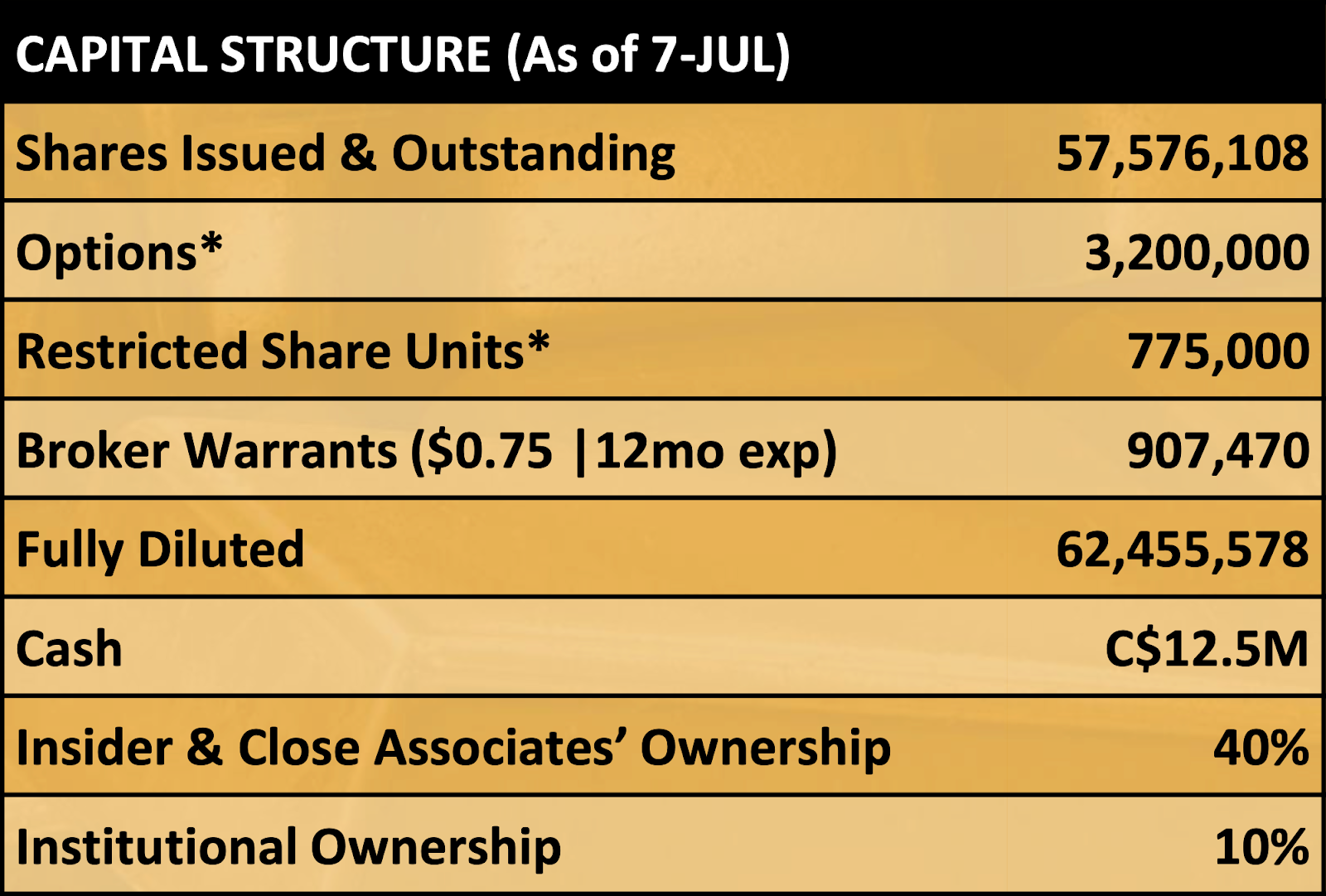 2. Management and Insiders account for 40% ownership of the company

3. There is no cheap locked up paper coming free trading (previous financings were done with no warrants, the only locked up stock is with management, and is escrowed for three years

The biggest catalyst for Eclipse is their Late Summer drill program.

I will be watching for the following internal catalysts and developments:

This project is located in the world’s most favourable gold jurisdiction, as such there is minimal to zero geopolitical risk. There is nothing we need to watch here.

This leaves the gold price as the most important external catalysts. I am very bullish on further price appreciation and feel supported in this conviction by agnostic heavyweights like Berkshire Hathaway beginning to allocate money to gold miners. Berkshire is notorious for making long term, conservative bets, correctly.

Disclosure/Disclaimer: Notice to Readers: Cambridge House publishes corporate profiles based on its assessment of the interest that its readers will have in them. Cambridge House is paid a fee by each corporation profiled. Cambridge house principals may from time to time buy and sell securities in the profiled corporations. Opinions expressed in this profile as they relate to the potential for projects, expectations about possible corporate spin-offs and potential for share appreciation are the personal opinions of the principals of Cambridge House. This profile is not intended to be a prospectus or other similar disclosure document and Cambridge House cannot assume responsibility for its accuracy or completeness. Cambridge House is a publisher, not an investment advisor and nothing in the profile should be interpreted as investment advice. Full disclosure of Eclipse’s business and projects, including risk factors relating to the corporation and its business, can be found at www.sedar.com.